I have been known to shout at the television. I know it doesn’t help, but it makes me feel better. I was certainly doing so when watching what I thought would be a fascinating BBC documentary called Around the World in 60 Minutes (available on iPlayer in the UK until 22 March 2011). This film “whisks you around the planet” to see what an astronaut would see on a single orbit from the International Space Station (ISS). 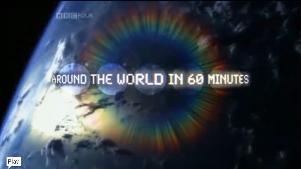 What a great idea, I thought, wondering just where the chosen orbit would go.

We started at Greenwich, on the prime meridian, which makes some sense from a navigation perspective. It soon became clear, however, that this programme had major flaws. In particular, it demonstrated a shocking ignorance of space travel.

The inevitable breathless commentary began delivering statistics of such mind-numbing stupidity that I wondered if somebody on the production team had written it by assembling a few random facts from Wikipedia.

The ISS, we were told, is structurally complete and is “the size of two football pitches”. Because it is most clearly not the shape of any number of football pitches, this strikes me as a singularly unhelpful bit of dumbing-down. Kudos, then, to astronaut Piers Sellers who provided some genuinely interesting insights. He’s been up there six times, the lucky so-and-so, and was both eloquent and engaging about the experience. The pressurised volume of the ISS is about the same as two jumbo jets, he told us, adding that this is plenty for the typical six-strong crew.

As the documented ‘orbit’ progressed, it immediately became apparent that fatal errors had been made. The first ‘stop’ (the term used in the commentary) was Iceland, for no apparent reason than to show the plume from the infamous Icelandic volcano Eyjafjallajokull. This gave an excuse for a spurious statistic: that the Atlantic Ocean widens by 0.003mm during each 90-minute orbit of the ISS.

Here’s a fact that the programme makers might have thought about, but apparently didn’t: the ISS orbits at an inclination of 51.6 degrees. This means that the furthest north or south it travels is 51.6 degrees from the equator (the orbit itself is approximately circular but appears like a sine wave when plotted on a two-dimensional map – see below). The southernmost tip of Iceland is at about 63.3 deg N. This means that the closest the ISS ever gets to Iceland is 190 miles above a point about 11.7 degrees – 700 miles – to the south. An orbit that takes the station over Greenwich (which happens to be at almost exactly the most northerly possible latitude of an ISS orbit) would pass more than a thousand miles south of Iceland. Not exactly a fly-by.

This is just the first of several basic mistakes about the way the ISS, or the Shuttle, moves. It isn’t even the biggest mistake.

From Iceland the programme moves us to the Amazon rainforest, in order to make a point about deforestation and deliver another spurious statistic. During an orbit, Amazonia loses 447 acres of rainforest, we are told. 447 acres happens to be 180 hectares, which works out at a suspiciously-precise two hectares a minute.

The statistics get worse, but not before the laws of orbital mechanics are further abused. From the Amazon, which is just about the equator, the orbit moves north to Venezuela before heading for Texas and Las Vegas. Just to be clear, any orbiting craft using current Earth technology must, by the laws of physics, spend equal time in the northern and southern hemispheres. Our erratic orbit, in contrast, has taken us as far south as the equator before making a handbrake turn back north. It’s just wrong.

Also wrong is the ludicrous precision claimed in the next sets of statistics. Every 90 minutes, 49,657 cattle are “slaughtered for food” in Texas, while 69,437,500 litres of water are consumed in Las Vegas. These stats are offered to five or six significant figures of accuracy, which (as any statistician will confirm) is completely unsupportable. To me, it makes the programme look rather desperate.

Our random tour of the globe continues with stops in Hawaii, South Korea, China, India, Kazakhstan, the Gulf, Ethiopia, and (another handbrake turn) Sweden. Each time we are offered some unconnected geographical factoid supported by a questionable statistic and interspersed with footage from orbit. The only thing that links these places is the track of our spaceship – but it is a completely bogus orbit that even the Starship Enterprise would struggle to perform and which the ISS certainly can not.

I’ve saved the worst until last, because there is one other fundamental error that wins this programme my nomination for the stupidest science documentary ever aired on British TV. Throughout the show, we travel east to west – from Greenwich to the Americas to Asia and back to Europe. The ISS, and the Shuttle, and the rest, go the other way. They have to, because they are launched to take advantage of the direction the Earth rotates.

To me, this demonstrates a level of stupidity that beggars belief. And it made me shout at the television even more than usual.