I didn’t get it at first. Ploughing my way through Stella Rimington’s latest novel Rip Tide – an advance copy kindly sent by her publisher before my interview with the great Dame of spy fiction a couple of weeks ago – I couldn’t understand why it all seemed so second-rate.

I had arranged to see Rimington, a former director general of MI5, when I learned she was to appear at our local book festival. She was a late replacement for John Simpson, who had been due to speak but was called away to interview Burmese leader Aung San Suu Kyi. 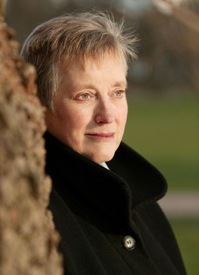 As the first woman to lead a British intelligence service, and the first spymaster to be publicly named, Stella Rimington demonstrated a mould-breaking attitude from the beginning. As a junior intelligence officer in the 1970s, she led a campaign to have women treated equally in this bastion of testosterone-fuelled machismo. As the leader of the service, she drew back some of the shrouds surrounding it. On retirement, she broke the mould by publishing an autobiography.

And now, as a novelist, she has again set out on a quest for modernisation. During our interview and during her public speech, she explained that she wanted to get away from the caricatures portrayed in older spy fiction – the Duckworth Drews and James Bonds that typify the genre. She also wanted to get away from the unrealistically dramatic portrayal of events that fire the public imagination, pouring particular scorn on the popular TV series Spooks.

And so she created Liz Carlyle, the MI5 agent who is “not me, but with some elements of me in her”. Carlyle stands for no nonsense and, in a phrase which Rimington returned to a few times during our chat, “will not be patronised”. The fictional agent is also sometimes “allowed to say things that I once thought about saying”.

In this sixth Liz Carlyle novel, Rip Tide, our heroine becomes embroiled in an international plot which begins when a young British muslim is captured taking part in a pirate raid off the coast of Somalia. The threads are gradually pulled together and bring about the appearance of many of the key characters from previous books. Meanwhile, of course, Liz has a minor romantic intrigue playing in her own life.

When I started reading the book, I thought my review would focus on the sloppy errors which fairly leap off the page.

In the opening chase, a French corvette opens fire on the pirate skiff using its “pair of .30 mm cannons”. I’m no armaments expert, but I know that there is no such thing. A quick scan of Wikipedia tells me that the cannons typically mounted on a modern French corvette would fire 20mm rounds, not 0.3mm. Ships of WWII vintage may have been equipped with .303 inch guns, but that’s still a very different thing. 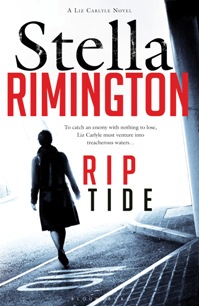 Rip Tide is the sixth Liz Carlyle novel; a seventh will be published in 2012

Just a detail? A dozen paragraphs later and battle is underway: “The gunners swung their cannons round to point directly at the skiff and fired. A hole appeared above the little vessel’s waterline, and the skiff began rapidly to take on water.”

The devil may be in the detail, but it’s hard to imagine a bullet measuring just a third of a millimetre across managing to sink anything, even if it struck below the water line.

Technical details aside, this is a book begging for an editor. When I see an organisation given both singular and plural identities in a single sentence, I know that something is seriously wrong (“Al Qaeda, under pressure in Pakistan and Afghanistan, was looking for safer bases from which to launch their attacks against the West“). There is further sloppiness elsewhere: “…he was trying to stop the blood by stanching it with what was left of his shirt…” If stanching doesn’t work, perhaps he might try staunching it.

Don’t they have a spellcheck facility at Bloomsbury?

In fact, these errors provided a bit of welcome relief from the stilted prose and clunky plotting of the book. I began to look forward to the next one, and at least this made me persevere to finish the volume. So, is my conclusion that that this is a slightly dull book peppered with faults, and worth reading only if you’ve already invested in the Liz Carlyle story?

No. Because that’s when it struck me. The book certainly is dull, and certainly has serious flaws. But that is its genius.

Stella Rimington said that real life intelligence work was much more boring than people might think. She said that there was never enough good information, and described various cock-ups that in some ways defined her career. She also said that she wanted her fiction to more closely resemble reality than most spy novels. Clearly, then, this is a triumph!

In person, Stella Rimington was much warmer and funnier than I might have expected a former spookmaster-general to be

3 comments for “Ripping into Rip Tide”