At first sight, it seemed a ridiculous proposition: start writing a novel on 1 November, and have 50,000 words done by the end of the month. That’s nearly 1700 words a day, every day, on top of the regular workload. What kind of idiot would do that?

Well, me and about 300,000 others globally. We all took part in National Novel Writing Month, an initiative that started in 1999 and has become something of a phenomenon in writerly circles.

Its origins are in the USA – hence ‘national’, which makes everybody in the rest of the world wonder just how insular Americans can be – and is now well overdue a rebranding exercise. There are people doing this across the globe, in many different languages. There were 25,000 participants in London, 5000 in Manchester, and over 200 just in my rural English county. 400 in Lithuania. 600 in Kenya. 4000 in Indonesia. You get the picture.

It costs nothing to sign up, although the organisers miss no opportunity to pester for contributions to their running costs and good causes. It’s a million dollar per year non-profit organisation, but contributions remain entirely voluntary.

What writers get, for signing up, is support and encouragement though online forums and a network of local volunteers.

Most valuable for me was the online dashboard on which progress could be recorded. I liked the graphic representation of how far behind I was (and I was always behind) with calculations of the words remaining and the words per day to meet the challenge. It’s nothing you couldn’t do with a spreadsheet, but I think this semi-public display helped maintain motivation.

My local group met every Saturday afternoon in a pub, and who doesn’t like an excuse to visit the pub? I only went to one meeting, but am looking forward to the ‘thank the gods it’s over’ party tomorrow.

I approached the exercise with serious misgivings about the emphasis on quantity rather than quality, which have only partially been allayed. The logic is that the first draft of a novel will be rubbish anyway, but you can’t start fixing it until it’s drafted so better start bashing that keyboard. This does seem valid. 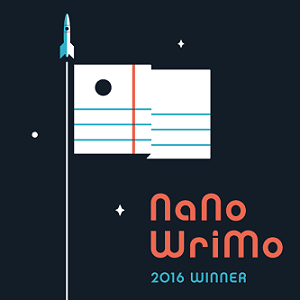 Everybody that meets the 50k target has ‘won’. Writers abuse language shock

The beginning of November saw me out of the office more than usual (consecutive days at a trade fair and a scientific conference, for instance) so I fell behind the par line from day one. My output increased quite steadily, and a final push over the last few days saw my total pass 50,000 words on day 30.

What fool decided to run this thing on a 30-day month? Don’t they know that 31-day months exist?

The National Novel Writing Month is known to participants as NaNoWriMo, which looks less clumsy at the end of November than it did at the beginning. The writers often refer to themselves and each other as either NaNoers, or WriMos.

Neither of these make sense, and if I could change one thing about the whole exercise it would be this. We aren’t National Novellers, and we’re certainly not Writing Months. The abbreviation should be NoWris – Novel Writers.

I ended the month with two or three chapters of my genre-bending steampunk sci-fi horror environmental parable still to write, which I will do. Just at a slightly more relaxed pace.