The Astronomy Photographer of the Year competition, organised by the Royal Observatory Greenwich and Sky At Night magazine, has announced its results. Nearly 800 images, from shots of meteors streaking over the sky to deep-space images of nebulae, were submitted and provide a visual treat for anybody (like me) who enjoys seeing a bit more of the universe than the daily grind allows.

I can thoroughly recommend a six-minute slide show created by the BBC, highlighting some of the better entries and providing thoughtful narration which adds useful and interesting information (BBC voiceovers can sometimes detract from the experience, I feel, but this one is good) .

Now, far be it from me to criticise the eminent judges who selected the winners, but I do have a problem with the image selected as overall winner. It’s a beautiful picture, showing Jupiter and two of its moons (Io and Ganymede), with wonderful detail visible on all three bodies. But it’s a fake. 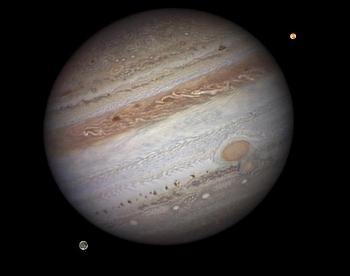 As the narration reveals, this is a composite of three different images photoshopped together. The gushing narration celebrates this trickery as ‘absolutely astonishing’, but I find it slightly disturbing.

Its a long time since anybody believed the old cliché that the camera never lies, but in space imagery in particular I think the dividing line between truth and fantasy has long been crossed. We often see artists’ impressions presented as photographs, and nobody seems to think that this is wrong.

Well, I think it’s wrong. By all means use the power of digital imagery to create new and wonderful vistas and to imagine worlds beyond the reach of telescopes. But be honest about it. Faked pictures should always be appropriately labelled, and for my money they shouldn’t win photography competitions. This is a great piece of art, but it isn’t a photograph.

← A free agent
Sustainability vs legacy at London 2012 →