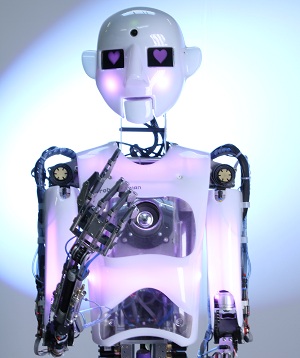 I HAVE to share this picture, received today accompanying a press release sent to my laboratory news website LabHomepage. The story concerns a robot known as RoboThespian, made by a company called Engineered Arts, which is described as a ‘life-sized, programmable, humanoid robot for entertainment and communication. It can talk, sing, and even recite Shakespeare’.

The next generation RoboThespian, to be released in early 2013, will be able to do that and more, the press release tells me. Its additional functions include running, jumping, and – if we take the picture at face value – swearing.

For the image sent to illustrate the press release shows next-generation RoboThespian in defiant pose, with one finger raised and the words “up yours, meatbag” apparently poised to escape his voice synthesis unit.

A closer look reveals purple hearts formed in the droid’s optical reception units (eyes), in a parody of the universal cartoon semaphore for a creature hopelessly in love. What can this mean? This robot wants to love you, but now the brandished finger looks slightly more sinister and threatening. I certainly feel I’d like to give him a wide berth.