It isn’t April Fools Day, I’ve checked. So the press release this morning promoting a new cosmetic product is, presumably, genuine. It promises a ‘botox in a bottle’ treatment of the sort that I would normally dismiss as snake oil and consign immediately to the email recycle bin.

But this one is different. Because this one really is snake oil. 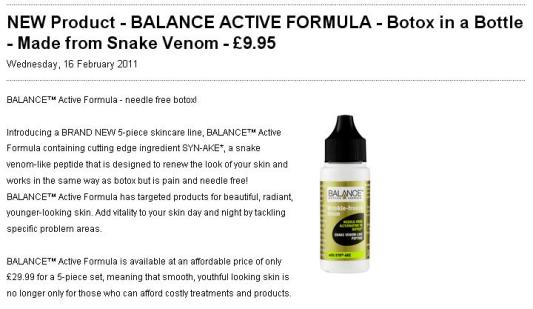 The phrase snake oil usually means any product that is sold on the basis of magical healing powers – powers that are, of course, unsubstantiated. It comes from the days of the American Wild West, when travelling salesmen would put any old garbage in bottles and sell it to gullible consumers.

These salesmen took the phrase from a traditional Chinese medicine, but it’s safe to say they rarely if ever put any actual medicine in their products – and even if they did, their claims would be fantastically exaggerated to include the cure of almost any ailment.

For the last century or two, then, the term snake oil has meant something that carries inflated claims of efficacy but which has no effect other than to lighten the wallets of those foolish enough to buy it.

Until today, and the launch of something called Balance Active Formula, a skincare product made from snake venom. This will, we are promised, work the same way as botox but without the needles or the pain.

I could prattle on about the dubious claims made here, or the inconsistencies in the press release (does it cost £9.99 or £29.95? Is it made with snake venom or with a “snake venom-like peptide”?). But really I have only one question of the manufacturer: Have you no sense of irony?