I’ve got quite swept up in enthusiasm for the Avro Vulcan, the last airworthy example of which is retiring this year.

It’s a remarkable aircraft by any measure, and I have a particular personal affection for the beast. One of them nearly blew me over one day, while I was innocently going about my business. It’s an unlikely tale, and testament to the agility of this large aircraft. 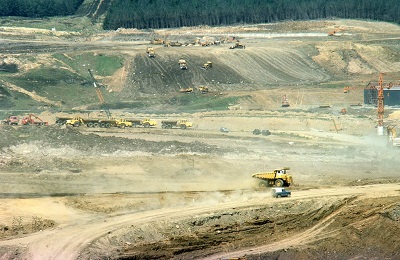 Kielder dam under construction, pic found on Wikipedia. That might even be me in the Land Rover

In a remote corner of Northumberland is Kielder Water, the largest man-made lake in the UK. Holding the lake in place is the Kielder dam, a massive structure made mostly of earth. And I put it there.

I was one of hundreds working on the project but, as the site engineer responsible for the downstream setting-out, I really did put the, ahem, damned thing in its place.

The job involved using theodolites, geodimeters, and other surveying equipment to position hundreds of wooden pegs with level rails (for height) and batter boards (for slope). These guided the drivers of the dump trucks, scrapers, and bulldozers to deposit a few million tonnes of earth in the right place.

The Kielder valley was also used for low-level military flight training, with USAF A10 Warthogs and RAF Vulcans being a regular sight. Their route to or from the Otterburn Ranges would bring them skimming the tree tops over the hills and dipping into the valley between.

Although the dam is made of earth, the project also included construction of substantial concrete valve tower. This stands on the valley floor a short distance upstream of the dam, its top above water level, and houses three huge valves to control the flow of water through a tunnel under the dam and back into the North Tyne.

Where the dam increased in height centimetre-by-centimetre over a couple of years, the valve tower appeared almost instantly. It was constructed by the process of slipforming, in which the formwork was filled with concrete and progressively hoisted. It was a round-the-clock operation that grew the structure from nothing to 50m high in just a few days.

This, it seems, was a surprise to the jet pilots. A few days after the tower reached full height, I was on the centreline of the dam setting up my theodolite when I heard the unmistakeable howl of a Vulcan bearing down on us. The aircraft appeared over the southern ridge of the valley, heading straight for our shiny new concrete tower.

In my mind’s eye I see the pilot’s eyes widen in surprise at this unexpected obstacle, but in reality I couldn’t have actually seen that. What I did see was the aircraft making a sudden course adjustment, banking steeply to the right – towards me – and applying power to climb out of danger. I could feel the vibrations in my chest and smell the exhaust as she flashed over. It was quite an experience. 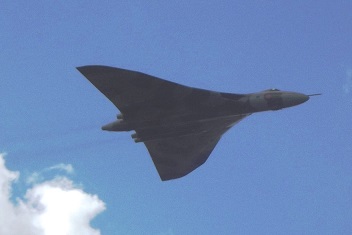 XH558 flew low overhead last month, but not as low as that day up at Kielder

The episode came flooding back last month when XH558, the last flying Vulcan, came to visit. Her flightpath was published on the Vulcan to the sky website, enabling me to find a convenient lay-by just a few miles from home and wait. I had expected her to be at altitude, and was delighted when in fact she flew past at barely 500 feet and manoeuvring. This one picture is all I took, as I put the camera down to enjoy the brief spectacle with my naked eyes.

I’ll probably never see a Vulcan in flight again, and after the 2015 display season it seems that nobody else will either. This is a pity, as it is one of those few aircraft with real presence, but the motto adopted by XH558’s legion of fans is appropriate: don’t be sorry that it’s over, be happy that it happened.

← Up hill and down dale
Porsche 718: launch goes a bit off-colour →